Along with my full time job, I teach a business course at the local college.  It’s a great opportunity to share personal experiences from the business world, and broaden my knowledge of a variety of topics, from entrepreneurs to legal matters. But what adds to the appeal for me is the interaction with the students. There is usually a mixture of traditional students and those who have been in the workforce for a while.  Sometimes the discussions can get loud and occasionally off topic, but that’s all part of learning.

This week the college is on Spring Break. Some of the students were capitalizing on vacation plans and heading for warmer climates. The rest of us will continue to work.  But the idea of Spring being just around the corner triggers many ideas of getting outside, enjoying the fresh air and sunshine. It will be here soon.

While working on a project, I often have to draw on memory when it comes to the season and the setting.  The short story featuring Jamie that I recently completed takes place in early June. I began writing that in the dead of winter. At times I would be outside, clearing the driveway from a foot of snow, before settling down at the keyboard. Visions of people frolicking on the golden sand and gentle breezes of Lake Michigan were certainly not something that was happening outside my window.  Authors have to be able to adjust, using whatever methods work to put you not only in the right frame of mind, but the right setting and time of year that ties in with the story.

Sometimes it’s easy.  Dialing up some Beach Boys on the radio helps. Finding some pictures on the internet can be good too. Every writer is different. You find what works, at give it a try. 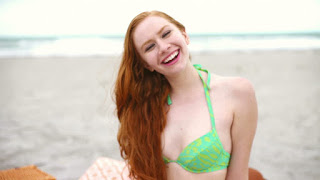 Yes, Spring Break is here. But I’ll be at the keyboard, working on the next story. I need a good opening. So far, I’ve got:  A man walks into a bar…   Hmm. Think that needs a little work.

Since Jamie is on my mind today, here’s the opening from “Fleeing Beauty” which also takes place in early June, where Jamie learns more about her late father.

I should have known better. Everything had been calm and quiet the last couple of months, which was very unusual for me. But I had been lulled into a false sense of security. The warmth of the late afternoon sunshine could have been to blame. That made perfect sense to me.

I was in the front yard, kneeling on a thick foam pad, my fingers caked with dirt. This was an unusual activity for me. But Malone had pointed out that it was the perfect spot for some flowers and at his urging I bought a flat of brightly colored flowers that would liven up the space. So on this sun-swept day in early June, I was discovering my abilities as a gardener. There was about an hour before Linda, my best friend, would arrive. I was enjoying the warmth of the sun on my back and shoulders. Days like this made me want to break out the tanning lotion and sprawl on a blanket in the yard. But no matter my efforts, I could never achieve the golden brown color that Linda was capable of. I just get pink.

As I was tamping the last bit of earth back in place, my cell phone started ringing. Wiping the excess dirt on my shorts, I pulled it from my back pocket. I answered without even looking at the screen.

“Jamie, this is Bert. Are you anywhere near a television?” My step-father’s deep voice boomed in my ear. He didn’t sound angry, nervous, or upset.
“I’m at home. Let me go turn it on. What’s happening?”

“Look at Channel Four. This should be one of the lead stories.”

I ran inside and fired up the television. A commercial was wrapping up and I watched the five o’clock anchor open the broadcast. As I watched, I lowered the phone from my ear. My eyes flicked to the ticker across the bottom of the screen. In bold letters ran the words “Treasure Trove Discovered”. The anchor tossed the story to one of the onsite reporters.

“Thank you, Carmen, and good afternoon. I’m standing outside one of the many converted commercial buildings that serve as art studios populating the area around Wayne State University. It was here today that workmen found what appears to be a trove of previously undiscovered artworks created by local legend Peter Richmond in the months before his death more than twenty years ago. The workers were called in to repair a broken water pipe. During their efforts, they learned that water pressure had punched a hole through a wall. Further inspection revealed a hidden storeroom adjacent to the studio Richmond himself used for years. It is uncertain how many pieces have been discovered or what condition they may be in.

“Richmond is known for his dramatic works in a variety of mediums. Many of his larger pieces are prized possessions in museums, including our own Detroit Institute of Arts. Other examples of his work can be found at Meadowbrook Theater in Rochester and on the campus of Wayne State University. I was able to interview a representative from the DIA, who said that if it can be confirmed these pieces are indeed the work of Peter Richmond, the collection could be priceless. Attorneys for Richmond’s estate were unavailable for comment. Additional police units will be stationed around the site to ensure security is maintained.

Since I mentioned them earlier, here’s one of my favorites from the Beach Boys. Hope you enjoy it.

Posted by Motown Mysteries at 10:30 AM