A few years ago, I was asked to facilitate a workshop for people interested in writing fiction. The plan was to offer 3 segments of 90 minutes to give examples and discuss various aspects of crafting a good story. I covered topics including characters, dialogue, conflicts, and settings.  By the end of the third session, about a dozen people had been there each week.  When I told them we were done, they barred the door and begged for more.

What was supposed to last 3 weeks went on for more than two years. And even with my departure from the group, it’s still going strong. Several people have even submitted stories and poems for publication. That’s saying a lot.

I’ve been interested in writing for a long time. But it was only in the last eight or ten years that I got serious about it. So through trial and error and multiple revisions, I learned what works for me. The idea of sharing that information was a no brainer. Telling others might save someone else a few weeks or months of work.  Hell, even dealing with rejection was part of the experience. It taught me to have a backup plan.

Yesterday I received a pleasant surprise in the mail. Members of the old workshop group have gone so far as to name it and had membership cards printed. They sent me one, certifying me as a member of “The Stormy Night Writer’s Society”.  I’d shared a short story with then that began with the crazy line, “It was a dark and stormy night. No, really it was.”

So if you have knowledge or a talent, it’s good to share. You just never know where it might lead. Because you never know who you might inspire, or where that may lead.

Here’s an excerpt from “Why 319?” that kind of fits the bill.  In this scene, Chene has gone back to the apartment of the latest homicide victim where he encounters Simone, the roommate, who is still dealing with the sudden death of her friend. Chene senses she needs attention, but Chene takes a different approach.

I went into the kitchen. The muffin tin she had used yesterday morning was still sitting on the counter, residue from the batter stuck hard to the surface. There were four fingers worth of cold coffee in the pot. I sensed she hadn’t eaten since we’d been here.

Back in the living room, Simone stared vacantly at the windows. I’m no therapist, but even I could tell that her body would start shutting down if she couldn’t get past this point. She would also need fuel in her system. I turned back to the kitchen to check the supplies.

What the hell was I doing here?

The kitchen was surprisingly well stocked. I would have expected two young, single women sharing an apartment to eat out frequently. Apparently, one of them liked to cook. I found some boneless chicken breasts in the refrigerator, along with a fresh box of mushrooms. There was a lemon just starting to shrivel and a bottle of Chardonnay already opened. Hunting around, I discovered a bin with flour and some linguini noodles. I got started.

After slicing the chicken into thin strips, I dredged it in flour. The skillet was heated with a chunk of butter slowly melting in the center. I added the chicken and sliced the mushrooms. While it was browning, I found a pot for the pasta and got that boiling. With the chicken brown on both sides, I added the mushrooms, the juice from half the lemon and a generous glug of wine. I found a small skillet and used it to sauté some onions and minced garlic in a few spoons of olive oil. When the pasta was done, I drained it, then tossed it in the oil mixture. I was serving it onto a platter when Simone appeared in the doorway.

“You’re cooking?” Her voice was incredulous.

“Somebody’s got to. I’m betting you haven’t eaten since Friday night.”

She shrugged. “I haven’t had much of an appetite.”

I guided her to the table and set a plate in front of her. She looked at me suspiciously.

“Chicken piccata and pasta with olive oil and garlic.”

Simone tentatively tried a bite. I poured her a glass of wine and set it beside her plate. She chewed thoughtfully, then washed it down with a sip of wine. I didn’t say a word while she speared another piece of chicken. I tested it, then watched her try the pasta. Apparently, her body was responding to the food.

“This is really good. I wouldn’t have expected a cop to cook.”

It was my turn to shrug. “I like to eat. Restaurant food gets boring all the time.”

It took a while, but she ate everything I’d put in front of her. She drained the wine, then sat back, looking at me. 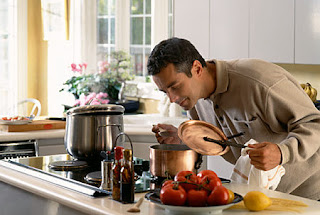 There's been a lot of classic Motown songs coming up on the stereo.  This is one of my favorites from Marvin Gaye.  Hope you enjoy it.