I am a book junkie.  No surprise really. Most authors believe that if you want to be any good as a writer, you gotta read the work of others.  As a kid I devoured a wide variety of books, but something about crime and mystery always captured my attention. When the teenage years arrived, one of my favorites was the great John D. MacDonald. A few years later I stumbled upon Elmore Leonard whose sharp criminals and twisted methods captured my imagination. That’s when the idea of writing my own stories probably began.

Right now I’m about a quarter of the way into Hill’s novel “Horns” and it’s moving right along.  Then I read this passage.

“…Lee would learn the truth about music; that it was the third rail of life. You grabbed it to shock yourself out of the dull drag of hours, to feel something, to burn with all the emotions you didn’t get to experience in the ordinary run of school and TV and loading the dishwasher after dinner.”

My first reaction?  Damn, that’s exactly right!  Hill captured the essence of how important music is.  It’s always been a part of me. When I’m writing, the stereo is on or Pandora is cued up, bringing a variety that energizes me.  And it’s not uncommon for me to incorporate songs into the stories I’m writing. Music is indeed the third rail. It’s there for my characters as well as me. Ya gotta have it.

So thanks to Joe Hill for so adroitly describing it.  And if you’re interested in something a little different, check out his site. 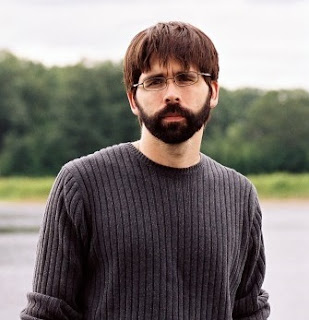 Here’s an excerpt from “Fleeing Beauty” where the music is just a subtle mention in the background, but it gives a clue about the character.  In this scene, Jamie and Ian, a young friend who is helping her with project, are visiting an artist whose studio is in the same building as her late father's.

Ian led the way upstairs. We found Odon Krippendore’s studio at the opposite end of the hallway on the third floor.  He had a large space divided in half. One side was the gallery, where many of his finished pieces were displayed on easels and framed on the wall. The other side was his studio, where the natural lighting was the best. Sinatra was singing softly from an old stereo tucked in the corner. Krip was working on an abstract painting. A broad smile lit his face when he saw us. He dropped his brush in a jar of paint thinner.

“It’s Jamie and the young apprentice!  Come in if you can stand the fumes of paint and turpentine!”

“This is quite a setup, Krip,” I said, doing a slow turnaround.

“That it is. Come on the other side, it’s far more comfortable.”  He led us to the gallery, where a battered loveseat and chair commanded a view of his efforts.

I spent a few minutes bringing him up to date. Ian moved slowly along the wall, gazing at the paintings on display.  There was a small portrait, maybe an eight-by-ten, in a thin wooden frame down near the corner that held his attention for a while. I watched him start to move away, then go back to it.  He turned and waved me over.

It looked like the same woman who had posed for the “Fleeing Beauty” statue. Krip appeared beside me, staring wistfully at the painting.

Here's a favorite Sinatra song.  Hope you enjoy it.