Inspiration for scenes can happen anywhere, at any time. For me, it often occurs when I least expect it. I could just be out and about, minding my own business, when the moment strikes and it’s just too good to pass up. Take yesterday.

The local library was holding their bi-monthly used book sale. This is a great way to discover new authors, or pick up some bargains on a few favorites. They also had DVDs and CDs up for grabs as well.  So I wandered through the aisles early, working my way through the throng of shoppers. Purchases in hand, I moved to the cashier’s table.  A lovely young lady greeted me with a big smile and tallied up my haul.

Then she said, ‘That’s four-fifty. And you get a kiss.’

I’m an old man, unaccustomed to hearing such comments from young women. “Excuse me?”

“You get a kiss,” she repeated innocently. Only then did I notice the dish on the counter filled with little Hershey kisses.

“That’s what I thought you said.”

Her smile never wavered. There was twinkle in her eyes as I paid up. It made me wonder if she’d been waiting for an opportunity to mess with an old man’s mind.  But that little encounter is going to end up in a future story, of that I’m sure. And you just never know where one kiss might lead.

Here’s an excerpt from “Devious” that hinges on a kiss. In this scene Malone and Jamie are just starting to learn about each other and have just spent a relaxing Sunday together. 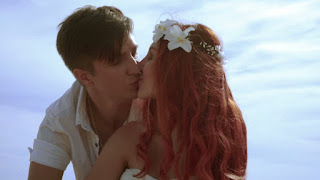 We walked slowly up the stairs to my apartment. I bumped my nose on the door. It was locked. Malone had to remind me to secure the place when we left. He was laughing softly as he took the keys from my hand and unlocked the door.

“You still live close enough to the big city that you should always lock up.”

“Yes sir,” I said, rubbing my nose. I walked several steps inside before I realized he wasn’t behind me.

I came back to the door. “And a lovely, relaxing one at that, but it’s not that late. Come in.”

He hesitated. “I don’t want to rush things, Jamie.”

I don’t know if he could hear it, but my heart was thumping so loudly it could have stopped traffic on I-275. And that’s three miles away. “C’mon, Malone. Stay for a while.”

He hesitated again. My mind raced through all of the things I had done in the past to scare guys away. Being pushy or too easy was one of them. Attacking them in the hallway was probably another. But I really wanted him to stay. I couldn’t tell if he’d made up his mind or not, so I jumped right in.

“Look, Malone. I’m not a kid. Neither are you. I’m not some cop-groupie. We’re both adults. We’ve met half a dozen times or more. We’ve talked, gotten to know each other a little. We’ve just spent a lot of time together over the last two days. We’ve got a lot…”

Somewhere in the middle of this speech, he stepped into the room, pulled me close and kicked the door shut behind him.  Then his fingers were caressing my face as he leaned in close for a kiss.

“Jamie,” his voice was a soft, sexy whisper.

His lips traveled down my neck. “Sometimes…”

He was working his way back toward my ear. “You talk too much.”

I admit this tune didn't make the rotation on Pandora today, but it definitely jumped to mind following yesterday's  interactions. Here's Dooley Wilson.

https://youtu.be/d22CiKMPpaY
Posted by Motown Mysteries at 8:40 AM