As the nuns in Catholic school would often remind me, ‘change is inevitable’.  With that in mind, this week’s character interview is going to take a little detour from the original format. Hey, that’s what creative writing is all about.   So you’ll get to learn a bit about Flynn from the “Traveling Circus” and Ingar Rudholm, the creative artist behind him. 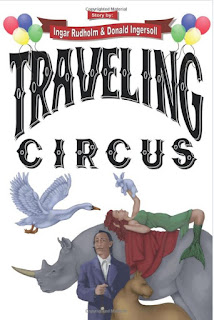 Trapped by a mysterious traveling circus! Young Flynn must find his inner courage to battle his way home. A crooked ringmaster, wielding a magic pocket watch that controls time, holds Flynn captive against his will. Escaping requires reaching out to some unusual circus performers. So, he befriends Cordelia who’s cursed to become a mermaid at night and Albert the fortuneteller who has a crystal ball where he can see the future and the past. Using the power of imagination and the fortuneteller's magic, Flynn must escape the circus before the ringmaster erases Flynn's memories forever!

At the young age of fourteen, I shy away from large crowds, public speaking and talking to girls.

After school, I write and draw comic books with my best friend John.

I prefer music over television.

John is my best friend. He always has my back and sticks up for me when there are bullies in school.

Well, I didn’t instigate it, but Rena from my art class came up to me at a high school dance. As the fog machine created a cloud that surrounded them, she leaned in and kissed me! 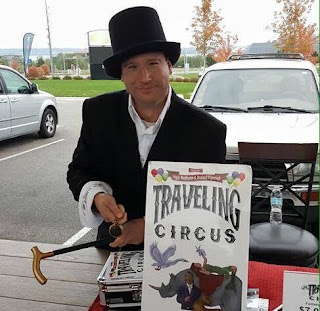 Here are few questions for the author:

Ingar Rudholm was born and raised in Whitehall. His mother owned Homestead Art Gallery on Mears right across the street from the Howmet Playhouse. His father built and remodeled homes in the Muskegon County area. As a child, Ingar's mother enrolled him in art classes. Thanks to his mother's art gallery, Ingar met several local painters and attended local art fairs from Traverse City to Rockford.

Traveling Circus is Ingar's first illustrated novel and includes a lot of famous painters, but it is also a tribute to the first artist Ingar ever knew and loved: his mother.

Mr. Cameron, my Language Arts Teacher in high school, encouraged me to write.  In college, I took a few creative writing classes. But it wasn't until I turned 39 years old when I finished my first book. For anyone who always wanted to write it's never too late to start.

I started writing stories when I was in 2nd grade, but my real passion is art. To be honest, I enjoyed drawing the illustrations for my book more than the writing process.

Even though it's a fantasy book for children between the ages 10 to 13 years old, I wrote the book on three levels.

1. Metaphors used in the story. For example, during the magical circus act a bunny transforms into a lion. The act represents Flynn, the main character, transforming from a shy "rabbit" into a brave "lion".

2. The message to the young readers: is find and develop your own natural talents. Flynn starts out insecure and he's not really good at sports. Most boys find their confidence in school sports, but Flynn finds his courage while using his art, his natural talent.

3. Since he finds his courage through art, all the characters and scenes in the story are based on famous paintings and artists.

Our musical selection seems only fitting for this story.

https://youtu.be/CXxztZs82yE
Posted by Motown Mysteries at 6:48 AM