This week’s character interview takes us in a different direction.  Here’s your opportunity to meet Beamer, the star of Clay Boura’s wonderful children’s books, Leave it to Beamer. 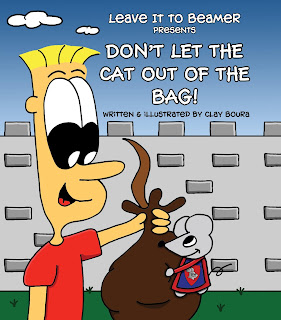 Here’s a little about the series.

Grown-ups say some confusing things.  How can you have a chip on your shoulder when there are no snacks anywhere near you?  Without a license or car, how is it possible to drive someone up the wall?  Come along with Beamer and learn about the real meanings to some silly sayings.

My name is Beamer and I’m 7 years-old.  I like…..pizza annnnnnnnd ice cream annnnnnnnnnd video games annnnnnnnnnd playing with my best friend Bert!  Sometimes we ride our bikes around the block.  And this one time Bert hit a REALLY big bump and fell off his bike.  And he scraped up his knee really bad.  But he was lucky because when he got home, his mom made him a banana split with sprinkles to make him feel better.  And the next day I wanted to ride my bike to Bert’s house to see how his knee was doing, but my Mom said I couldn’t ride my bike because it was raining cats and dogs, whatever THAT means!

Ummmmmmm, probably because Mr. Clay came over to my house and asked me not to let a cat out of a bag and asked if I knew about the elephant in the room and he said something about putting some proof of something in his pudding.  And I didn’t know what any of that meant.  So then he asked me if I wanted to be in his book and I said yes!

My muscles!  My daddy says that I’m as strong as an ox.  But I’ve never wrestled an ox, so I don’t know if I’m that strong.

And of course, we want to know the opposite, your greatest weakness.

Spinach.  I hate spinach!  The other day I said I was so hungry I could eat a horse.  But my mom gave me spinach instead.  YUCK!

Mr. Clay said that I have a great imagination.  And then he asked me why I think some people say ‘don’t let the cat out of the bag’.  And I didn’t really know.  So I told him what I thought and he said he was going to write a story about it.  And I’ve read lots of kids books and I’ve never heard a story like that before.  Mr. Clay said our idea was one in a million.  So I think he wants me to come up with LOTS more stories!

What do you do to relax after a day at school?

After school I usually get a snack and watch TV.  My favorite show is Teen Titans Go because they’re super heroes and they are really funny.  Especially Beast Boy!  He’s my favorite!  And every day when I start watching TV, my dad tells me I’m like clockwork.  But I don’t even like clocks, so I don’t know what he’s talking about!

Do you mean TV?  Because I definitely like TV better!  But my dad always makes me do my homework or read a book before watching TV.  And he always tells me that too much TV will rot my brain.  But my mom told me that things only become rotten if they sit out for too long.  And my brain is safe inside my head.  So I should be fine.

My best friend is Bert and my mom says we’ve known each other since we were 2 years old.  We always ride our bikes together and play at each other’s houses.  One time I even spent the night at Bert’s house.  But I started to miss my mom and dad during the night and Bert’s big brother called me a scardey cat.  But I actually like dogs more than cats so he doesn’t know what he’s talking about.  And Bert told me his brother is a big meanie and not to listen to him and he made me feel better.  I hope me and Bert stay friends forever.

Here's an excerpt from the story.

Grown-ups sure have a funny way of saying things!  The other day, my Mom told me she was holding a cat in a bag and she didn’t want me to let it out!
We had just come home from buying my Dad’s birthday gift and I was about to tell him what it was when my Mom said to me, “Beamer, don’t let the cat out of the bag!”

But we didn’t buy him a cat!  We bought him a brand new razor.  So I was very confused.  Why would someone put a cat in a bag?  And why wouldn’t they let it out?  Hmmmmm….. 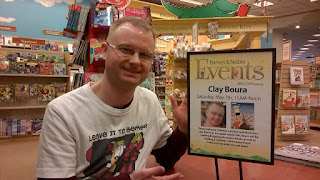 Clay Boura is a loving husband and father of three residing in The Mitten State.  At an early age, Clay developed a love for the arts.  Whether he was creating new cartoon characters or writing wild, imaginative stories, he knew that someday art would become a part of his future.  And over the years, his love and passion for the arts has continued to grow.  After becoming a father and seeing how much enjoyment his children got when he read them bedtime stories, he decided he wanted to become a children's author and illustrator.  And through the love and support of his family, he was able to achieve his dream and he became a published Author for the first time on January 6th, 2015!

Clay and Beamer had no trouble finding a tune that is perfect for their stories.

Posted by Motown Mysteries at 11:50 AM