One of most important lessons I learned years ago in a creative writing class was to know your audience.  You have to know who you’re writing your stories for in order to connect with them.  I remember one old fellow in a writer’s workshop who wanted to write children’s books for 3 and 4 years old. But his stories were overloaded with technical jargon that would have left the youngsters running out the door. Despite suggestions from others, he really missed the point.

This was brought to mind the other day at work. A couple of college interns were in the office with me and the IT guru, who were discussing some new equipment. We kicked around ideas about securing the remote control devices. After we came to a decision, I said “That will keep me from imitating Columbo to track them down.”  The guru agreed with a laugh. The two interns greeted me with puzzled expressions.

“You guys have heard of Columbo haven’t you?”  I asked.

The both shook their heads. I explained about the popular television series, the rumpled raincoat, the quirky mannerisms, the modern day Sherlock Holmes character portrayed by the great Peter Falk.  Still blank expressions. I mentioned the same actor had played the grandfather in The Princess Bride.  One intern perked up at this but the other was clueless. Watching that movie became a homework assignment.

So knowing your audience came back to mind. References to music, movies, actors and comics have to been in the proper context.  Otherwise, the audience may not have a clue what you’re talking about.  If they’re engaged in the story, they may take the trouble of looking it up.  If not, they could just as easily stop reading and move on to something else.

Just in case you're curious, here's a clip from the old Columbo series.  Falk was nominated several times for awards and won the Emmy twice for playing Columbo.  He also starred in a number of great Hollywood films during his lengthy career. 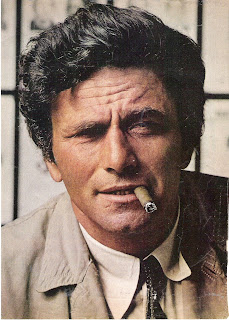 Posted by Motown Mysteries at 4:58 PM