Halloween Treat: A Free Copy of "Fade Away"


Since Monday is Halloween, I thought it appropriate to offer up a treat. So starting Monday and running through Friday, November 4 you can download a free copy of “Fade Away” on Amazon.

No costume is required.  Here’s the story.

Vincent Tyrell is trying to put his life together after being discharged from the Army. With no place to call home, he takes a job doing security work at a chemical plant in Raleigh, North Carolina. Just as he’s about to settle into a comfortable routine, a deadly explosion rips apart the night, leaving Tyrell badly injured. The explosion was the result of an experiment that went terribly wrong.

But the chemical blast has a strange effect on Tyrell’s body. The authorities are searching for him, blaming him for the accident. He’s desperately trying to find the men responsible, to see if they have a cure or a way to reverse the process. A cross country chase ensues. Will he find them before it is too late, or will he just Fade Away?

If that's got your interest, here's an excerpt.

***************************************************************************
I watched in horror as they went through the door.  The fire closed in, melting the building around me.
Somehow, I had to pull myself away. My hands worked and my arms could support most of my weight. My legs felt like overcooked pasta. The door was only ten feet from where I'd been thrown, one hundred and twenty inches. I could crawl that in no time.
This is exactly what I had: no time. The building was collapsing all around me. Ceiling beams and light fixtures kept crashing down from above. The firemen had pulled back, beyond the reach of the heat.
It took a minute to roll over and start crawling. Visions of jungle warfare kept snapping back into my brain. How many miles had I crawled through swamps and sewage elbows and knees propelling me along?  If I had enough time, I could probably figure it out.  But if I didn't get my ass in gear, it wouldn't matter. I had to move, get beyond those ten simple feet. Distraction always worked well in the past. By focusing my thoughts on something irrelevant, my body would take over the task at hand and get it done. Rock music was a favorite tool. I turned my brain to selecting the perfect tune for my predicament and my arms went to work. To the strains of "Burning Down the House" I started to crawl.
My legs dragged along behind me like two useless sticks of wood. It was up to my arms to get it done, and damned fast. I reached for anything to pull myself along, grasping the base of one of the few machines that remained upright. I pulled carefully, not wanting to topple it.  If it fell and blocked my path, I'd never get around it. If it landed on my back, I'd be dead anyway.
The machine wobbled but held as I inched forward. The heat was increasing. What the hell were these guys working with that could burn so damn hot?  The door was closer. Only nine feet to go. My hands and arms did it all.  Reaching, probing, and pulling me along. Blood continued to seep into my eyes, clouding my vision.
Eight feet to go.
My heart was racing with the increase of adrenalin. I paused long enough to wipe some of the clotting blood from my face. My sight improved slightly and I risked a glance at the back of the building. It looked like a Vietnam village after an air strike had been called in.
Fire shot through a gaping hole in the roof.  Dense smoke billowed up toward the rafters, obliterating everything three feet above the floor. Where the solemn row of machinery had stood was now a twisted pile of smoldering black iron. If this wasn't hell, it was as close as I wanted to be. I turned my head and resumed my crawl. Mentally I hit the replay button on my brain's MP3 player and cued up the song again.
Seven feet to go.
I had just gotten past the spot where the computer consoles had been when I sensed my time was up. Somewhere near the loading dock a large oxygen tank had been resting on a wheeled cart.  The heat finally passed its safety point.  I heard a muffled groan and saw the tank explode. It shredded like a grenade, sending most of the metal shrapnel rushing directly toward me.
My screams were drowned out by the roar of the fire. I covered my head with my arms and prepared to die. 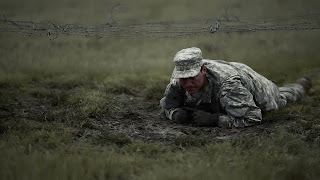 So just click on the link below to collect your treat. I hope you enjoy it.
http://www.amazon.com/Fade-Away-ebook/dp/B009MOA8ES

And if you've got the song stuck in your head like I do know, here's a link to that too.

Posted by Motown Mysteries at 8:19 AM