Last week I attended a local author’s event at a Barnes & Noble location in western Michigan. You never know what to expect at these things. The fact that the Chicago Cubs were playing in a World Series game that night probably didn’t help the turnout. But the hope is that you’ll have the chance to connect with some readers, tell them about your work and sell a few copies.  That’s exactly what happened.

I had copies of the three Jamie Richmond mysteries on display and was pleased by the reactions of the people who stopped by to chat.  Along with the books, I had a couple of bookmarks and a bag of candy.  One of the bookmarks has the artwork for the three books down the front.  Some of the people asked me about any other books that I’m working on.

That was my chance to talk about “Why 319?” where a serial killer is on the loose in suburban Detroit and three young women have been found in room 319 of different motels in different cities. The only clue is the title, written in the victim’s lipstick on the bathroom. That’s where my Major Case Squad, led by Jefferson Chene enters the picture.

That pitch got a lot of interest.  Last weekend I received the artwork for the cover of new release. While I don’t know when the book will be out yet, I wanted to share the artwork. 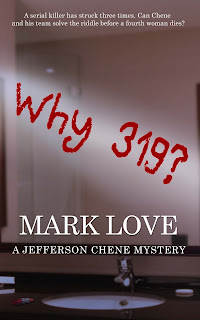 Posted by Motown Mysteries at 12:34 PM