There, I said it. While I can’t speak for everyone who writes, I’ll go out on a limb and say that many people who write have a tendency to be observant.  We pay attention to details. We notice things. Sometimes it can be the simplest thing that will trigger an idea or work its way into a story. Sometimes, it can become the story.

A few years back I pulled into the parking lot of an apartment complex. As I got out of the car, I heard a rumbling noise from a dumpster that was about fifty feet away.  No one was around.
Taking a cautious step or two in that direction, I was surprised to see a box launched from inside the container. Two more boxes immediately followed. Then a pair of hands reached over the lip and a head appeared.  A disheveled dark haired young woman, in jeans and a T shirt, was struggling to get out of the dumpster.

Curious, I walked over and gave her a hand. She assured me that she was fine. The dumpster diving was an attempt to recover her belongings after her ex-boyfriend had tossed her out.   As I walked back toward my car, a line of dialog raced through my skull.

“Somebody threw away a perfectly good brunette.”

I haven’t used that yet, but something tells me it’s going to appear in one of my stories soon. 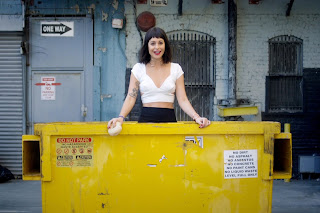 Posted by Motown Mysteries at 7:24 AM