Along with my regular job and my efforts at writing, I teach a business class at the local college. It’s a lot of work, but very rewarding.  There’s always a mixture of students. Some are fresh from high school and know everything while others have already been in the workforce, maybe even raising families while working and attending school.

In addition to several homework assignments, there is a big project where the students must create a business plan. Since writing is one of my passions, I always put extra emphasis on this. After all, being able to write well can serve them for years to come.

Last week as part of the lecture I explained the importance of knowing your audience. If your business or project is creating apps for smart phones, you may use terminology that the tech savvy audience will understand. But it you’re pitching your idea to a banker or investor who doesn’t have that background, your efforts will fall flat.

The same holds true in creative writing. I was reminded of an old timer who participated in a writer’s group I was a part of.  He wanted to write a picture book for young kids, maybe 3 to 6 years old. While his overall idea was good, his writing wasn’t.  He filled pages with description, even including the scientific names for butterflies, insects and cloud formations. The rest of us could picture youngsters getting bored and wandering away. That’s not how you engage your readers. You have to know your audience. Learn what interests them and draw them in. Then once they’re in, the trick is to keep them.

Here’s an example from “Vanishing Act” the second book in the Jamie Richmond series.

There wasn’t a doubt in my mind. He was going to kill me.
I knew it in my heart, in my soul—right down to the marrow of my bones. From the top of my wavy red locks to the bright, red polish on my toenails, I knew without a doubt that it was a sure thing. 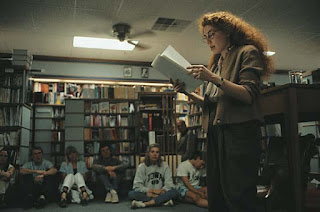 Posted by Motown Mysteries at 7:17 AM