This week brings us another character interview.  Here’s your chance to get to know Lara Faulkner, the protagonist of Country Roads, the first book in the series by Grea Warner.  Here’s a little teaser of the story. 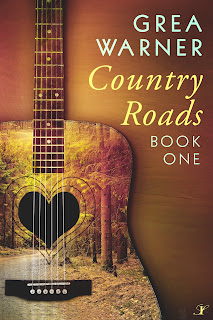 They were friends once …until their lives took them down separate roads.

Now, years later, when a child volunteers his uncle to sing for a fundraiser, Lara Faulkner realizes it is none other than her college pal, Finn Murphy. As the two get a chance to reconnect, Lara reveals to a compassionate Finn details of her shocking past and the traumatic decision she had to make.
Through trust and love, the bond between Finn and Lara deepens as the country singer manages to get an emotionally scarred Lara to let down her self-proclaimed walls. But will secrets, lies, and tragedy cause a bumpy detour on their road to complete happiness?

Emotional, dramatic, heartwarming… fall in love with COUNTRY ROADS – the first in a continuing series by author Grea Warner.

Oh, I always hate this question. I don’t like talking about myself. It’s one of the reasons I never do well on the blind dates my friends try to set me up with. There are other reasons, too. But let’s go with that one.

In all actuality, my life is rather mundane. I’m a technology coordinator for a private school in a suburb of New York— miles and miles away from where I grew up. I’m content. But I don’t think I’ve ever been truly happy.

How did you get involved in this novel?

Chance meetings. Isn’t that what life really is…a bunch of random circumstances that somehow change everything? One of the first-graders in the school where I work volunteered his uncle for a special project. As it turns out, I knew his uncle. We were friends in college, seven years before. Finn reentering my life is what starts me on a whole new journey…well, really, what actually begins the life I was meant to live.

I had to learn to be resilient from an early age.

How about a weakness?

I have a very hard time trusting others—that they are not going to hurt me and that I am worthy of love.
Tell us something about your background that may or may not be revealed in the book?

There are some things only my mother knows, and other things I am too ashamed to even tell her. But what’s not a secret is what made me the person I am. Growing up with an alcoholic father with unpredictable rage tends to make you scared of your own shadow and can lead to fateful decisions.

No. Not at all. I am pretty much exactly the opposite. My career allows me to work independently most of the time. Interacting with the students is fun, though. I love that they still have so much innocence in them.

Sometimes I go walking with a few coworkers. But, often, I pick up a novel and get lost in the imaginary world of anyone who is not me.

Music—all genres of music. But since college, I have especially become a country music fan.
Who’s your best friend and what influence have they had on your life?

Growing up, my brother was my best friend. We were close in age and had the same experiences to share — the good, the bad, and the oh-so ugly. His protective nature and being around as a sounding board saved me. But, now, since he’s so far away, I consider Vanessa my best friend. I live somewhat vicariously through that vibrant, outgoing personality of hers.

Romance? Ha!  Uh, no. Is that really a thing? Since the summer after high school, I gave up thinking it was even a possibility.

Tell us about the one person you loved who got away.

I didn’t know it back then… although I should have. He even told me, and I hadn’t wanted to hear it. I didn’t believe. I didn’t trust. I wasn’t ready.

It’s mine—Lara Ann Faulkner’s. So, I tell it in first person. You’ll discover the secret of my past, as well as my thoughts and feelings about all that happens. And, heads up…you might want a box of tissues by your side. I’ve heard from a number of readers how emotional and heartbreaking my story is. But, also, how they can’t wait for what comes next.

There really wasn’t any other path. Grea Warner knew from a young age that she wanted to write. She was born to write. First it was in diaries with little metal keys and in written tales that she slipped to friends in study hall. School newspapers, a college television drama, and the soap opera world were next. After producing and writing a local show, she decided to delve into the world of the novelist. When her fingers aren’t tapping out her latest book filled with angst and romance, Grea can be found hiking the trails or jamming to her favorite country artists on the radio.

An excerpt from the story.
It was when I was looking at the board listing the arrivals and departures and thinking my nerves were too shot to even sit and wait, that I heard my name. It wasn’t loud. In fact, it was a bit winded. But I knew the voice well. Despite there being a number of people swarming around that area, I saw Finn instantly. He was a good few feet away. His head was shaking ever so slightly as he was pleading me with my eyes to come to him.

When I didn’t move, he looked around. I knew he didn’t want to be recognized. There were times when he didn’t mind it as much, but this…this certainly wasn’t one of them. And he didn’t have on any type of clothing that could be used as a disguise—not a ball cap, hoodie, or even glasses. Standing there in the brown suit he had worn to the party, it was probably close to a sure bet that someone would identify him.

But I guess he was willing to take that risk, because he walked toward me. I knew then that it was inevitable that we were going to talk. I certainly wasn’t going to take off running in my decorative heels and cocktail dress, after all.

“What? Where are you going?” His eyes swept repeatedly across mine.

“Why? No. Lar, please…please don’t leave.” There was a bit of panic when he said that last word.

When asked for a song that would fit this character, Grea suggested this classic by John Denver.
https://youtu.be/1vrEljMfXYo
Posted by Motown Mysteries at 7:27 AM