Another Time Another Place


Last week I was trading emails with a couple of the gang from the writer’s workshop I used to facilitate. One of the topics that we used to discuss in great detail was settings.  To me, that’s not just where the story takes place, but when. Is it a current tale?  Did it happen forty years ago? Is the location you refer to real or imaginary?  If it’s real, has it changed much since the era you’ve chosen.  All these questions were explored in great detail.

But one question came up often. ‘How do you get in the frame of mind to write something that taking place at a different time of year?’

Some people will look at photos of a specific time. Writing about winter? Dial up the Hallmark Channel or any other movie network and pick Christmas stories. Watch the snow fly, see the wind whip the decorations around, see the characters chatter in the cold.  Maybe put a few Christmas carols on the stereo.

In late fall and early winter, I was working on a beach story featuring Jamie. It’s part of a boxed set that Inkspell will be releasing this summer. Michigan winters can be brutal. They also seem to last forever. So I flipped through pictures of beach scenes to get in the right frame of mind.  Images of Jamie sunbathing and enjoying a swim in Lake Michigan started to come together. It takes practice. Hey, you find out what works and you stick with it. 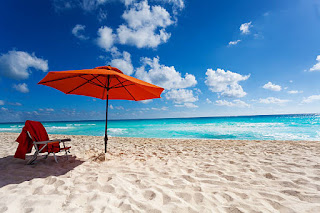 Here's an excerpt from “Fleeing Beauty” that was also written in the dark days of winter. Jamie is caring for Linda’s dog, Logan. They were leaving on a bright summer morning when a visitor arrives.

Logan and I were just about to leave late Saturday morning when the doorbell rang. Brittany was standing on the porch, wearing a Tigers T-shirt and a pair of skimpy white shorts and a wide smile.

I cringed at the formality. “Just call me Jamie. Caught me for what?”

“Well, Ian mentioned he had a game today and that he and Mr. Malone were going early for practice but he thought you’d be going to watch. So I thought I’d surprise him and go cheer him on, if that’s okay.”

Such youthful enthusiasm was infectious. “That’s fine with me.”

We hustled Logan into the car and swung by her house to alert her parents.  Once we got to the field I went to find a seat in the bleachers. Brittany took Logan up near the backstop. Within two minutes half the guys on Ian’s team were staring in her direction. Ian came over and looped his fingers through the chain link fence. Brittany put her fingers on his. They talked for a moment until the coach called his name. Sheepishly Ian trotted out into center field. Brittany walked up to the bleachers and took a seat next to me.

“Can I ask you a question, Jamie?”

“Are you and Mr. Malone married?”

A smile touched the corners of my mouth. “No, we live together. We moved in together at Christmas time. We’d dated a little while before that.”

“He seems like a really nice guy. Ian told me about how he’s known Mr. Malone for a long time and how he’s helped him since his dad died.”

“Malone’s a good guy. And you don’t have to call him mister. It makes him feel odd.”

“I’ll try and remember that. Ian said he really likes spending time with both of you, that you treat him like an adult, not like a kid.”

I thought about that. “Well, I look at him as a little brother. I think Malone does too.”

“Whatever it is, he seems to like you both a lot.”

As the game got underway, I discovered that Brittany was a tomboy. She understood the game and loudly cheered the action.  When Ian got a double at his first at bat, Brittany put two fingers in her mouth and whistled shrilly. The kid tipped his helmet at her. I glanced toward third base where Malone was in the coach’s box. Even from the bleachers I could see the grin on his face as he slowly shook his head.

Ian’s team played well and by the sixth inning had a four-run lead. The coach rotated some players, making sure everyone got a chance to play. Even though Ian was no longer in the game, Brittany watched with the same level of enthusiasm.  After the game, the team went their separate ways.  Malone took us out for a leisurely lunch at a burger shop near the field.  Ian reluctantly went to his house, where Terri had a few dozen chores for him. Malone dropped him off on his way to work. I took Logan and Brittany home.

Summer time hopefully is just a bit down the road. And there’s nothing like traveling music to go along for the ride. Here’s  a classic by Wilson Pickett
https://youtu.be/16u6w0cjjrU

Posted by Motown Mysteries at 2:32 PM