In my youth I remember reading a book that was filled with so many unremarkable people with similar names that I had difficulty telling them apart. If I couldn’t keep them straight, were other people having the same problem?  I considered that to be either laziness or a lack of imagination on the part of the author.

So once I started writing, it became part of my profile to make my characters different. Just like the people you see at the store, in the gym, walking through the neighborhood or driving in crosstown traffic, no two people will look or behave the same.  I want the people in my stories to be memorable.

Now except for rare occasions, I’m a casual guy. Jeans, T shirts, sneakers or boots pretty well covers it.  So my knowledge of fashion is somewhat limited. But thanks to the power of the Internet, it’s easy to find details on just about anything.

While working on “Fleeing Beauty” I wanted to include a character who was out of the ordinary.  Someone who didn’t fit the standard background, upbringing or attire. Someone who would stand out. So after several attempts, I landed on Harrison Mundy. He became the perfect foil for Jamie, with just enough intrigue to keep her guessing.  It took a few passes, but in the end it worked well.

Here’s the scene where Mundy makes his first appearance. Jamie and Linda are meeting him at a classy restaurant in the hopes that he will have information about her father Peter’s stolen artwork.

Mundy flashed a smile at me that was almost blinding in its brightness. “I prefer to know as much as I can about the people I am meeting. Even though I am retired, I like to keep my senses sharp.”

“So you’ve retired from a life of crime?” I asked.

“Really, Jamie, you know I am not a criminal. I was never convicted or even accused of an illegal act. I have many interests that have been cultivated over the years. Is there a particular area of my expertise that appeals to you?”

I took a moment to study him while phrasing my response. He was very handsome, with the dazzling smile, smooth complexion, and thick silver hair. He was fit and trim, perhaps a little taller than me, which would put him about five-foot eight-inches tall.  I had no doubt the suit he was wearing was tailor made for his frame. He spoke with an educated tone. His nails were manicured.

“I would like to know about art thefts, particularly the best way to do it. Did you always have a buyer in mind?”

He chuckled dryly. “Jamie, what makes you think I know anything about thievery?”

“Perhaps in your studies of the subject, you learned how thieves work.”

“That is a very good answer,” he said. “May I presume your interest stems from the recent discovery of your father’s work?”

“You may,” I replied somewhat sullenly. It dawned on me that I was mimicking his precise way of speaking. This wasn’t like me at all. And it was obvious that Mundy was in complete control of the conversation and the situation.

“So if you were hypothetically going to steal some of Peter’s artwork, how would you go about it?”

“There are many ways to execute a perfect crime. But each one takes a great deal of careful planning and preparation. Contingencies must be calculated as well.” Mundy paused. “Tell me about the building.”

Linda and I took turns describing the structure. I was surprised how much detail she was able to give, knowing she’d only been there today. But Linda is extremely observant. I described the minimal security system. Before I could tell him what had been stolen, Mundy raised a hand.

“Pardon me, Jamie, but I do not want to know what is missing. You are asking me to postulate a hypothetical robbery. I will need some time to consider various options. I must ask your indulgence.”

I realized Mundy was now on his feet.

Harrison Mundy dropped his linen napkin on the table. I noticed his glass was empty and the appetizers were gone. He shot his cuffs.

“Our meeting was for one hour. That time has passed. I have another commitment.” He turned slightly toward Linda and lifted her hand. Smoothly he bent forward and grazed his lips across her knuckles. “It has been a delightful pleasure to meet you both.”

Mundy turned to me. I was standing now, trying to figure out how to prolong the conversation.  His eyes were twinkling as he looked at me.

“Your reputation is well deserved, Jamie. I must admit to be intrigued by your—situation.  When the time is right, I will be in touch.”  With that he gently, but firmly, took my hand and did the knuckle grazing kiss.  I felt a flush run through me. Who was this guy?

When it comes to Sharp Dressed Man, you know there's a song that goes with it.

Here are a couple of possible photos of Harrison. 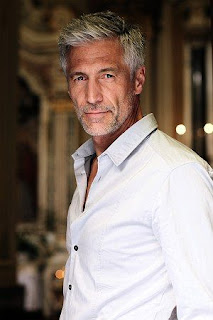 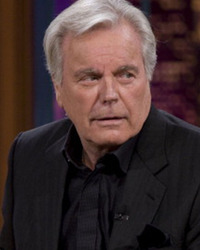 Posted by Motown Mysteries at 11:06 AM