Different people take different approaches. Doesn’t matter if you’re talking about life, career paths, culinary efforts or the route to the grocery store. And there’s nothing wrong with that. Imagine how boring it would be if we all did the same things in the very same way.

Take writing.  There are some very talented authors who are meticulous when it comes to planning out their work. They take the time to diligently plot out each step along the way. Some use notecards, others use a spreadsheet on the computer or a large whiteboard or flip chart. Hey, whatever works.

But that method is definitely not for me.

Even from an early age, I had difficulty working with an outline. It was too restrictive and made writing almost painful. I remember a nun at the elementary school who required an outline to be written and turned in before we wrote the paper. I cringed. I struggled. Nothing came to light. Images of getting my knuckles cracked by the good sister’s ruler for my ineptitude didn’t help matters. Then inspiration struck.

I wrote the paper first. Got it where it worked and covered all the topics. Then I went back and wrote the outline. That was turned in on schedule and I already had the big project done.  The nun was pleased with both the paper and the outline. So in the long run, everything worked out just fine.
But I still can’t write with an outline.

I find it confining. For me, it’s more natural to come up with an idea for the overall story and maybe a key character or two.  Once I’ve got them settled in, it’s my job to turn them loose. Forget micromanaging. I just trot along beside them and see what happens. And when I write, it’s rare that the story is shaped in chronological order. Very often I’ll have an idea for a scene or some dialogue that will just keep the neurons firing in my brain until the only recourse is to write it. When it’s down on the computer, then I can go back to the story. That’s one of the beauties of technology. I can move paragraphs or pages anywhere, all at the click of a button. Write it in sequence?  No thanks!

Here’s an example from “Why 319?” In this scene, Captain Pappy Cantrell grudgingly reveals his strategy for the three homicide investigations to Sergeant Jefferson Chene. The story is told from Chene’s perspective. 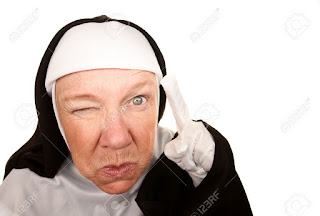 Yes, even though it's been decades since I graced the halls of the Catholic schools, the sight of a nun in a traditional habit can still creep me out.