I just completed a two-day book festival in the lovely town of Muskegon, Michigan that was part of the annual Lakeshore Arts Festival. There was a steady stream of people wandering through our venue on both days, many of whom wanted to hear all about the authors and our stories. 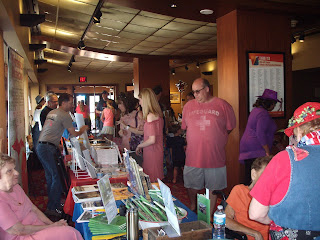 This was a great opportunity to get in front of potential readers and draw them into my mysteries.  For example, there were two young ladies who stopped by on Friday as the day was drawing to a close. They both professed a love of mysteries and we talked for quite a while.

I was pleasantly surprised on Saturday when they returned and headed straight to my table.  Cheyenne wasted no time buying a copy of “Why 319?”.  While autographing her book, I mentioned that it’s my practice to always be on the lookout for distinctive names that would make for memorable characters.

Not ten minutes later, her friend came back to purchase her own copy of ‘319’.  Her name? Mikahla.  I have no doubt both of these will appear as characters in the sequel I’m working on.

I did have a chance to grab a couple of photos between customers. While I saw a number of redheaded women during the day, this one certainly reminded me of Jamie Richmond.  What do you think? 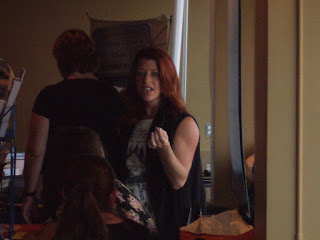 Some of the props on my table display included a newspaper clip from when Jimmy Hoffa disappeared more than forty years ago, along with an official FBI cap a friend gave me. As Saturday was winding down, I met a delightful couple who quizzed me about police investigations, the work of the FBI and ongoing mysteries in the Detroit area. They asked questions about ‘319’ and Per, who was from Denmark said, ‘this would make a great movie.’ 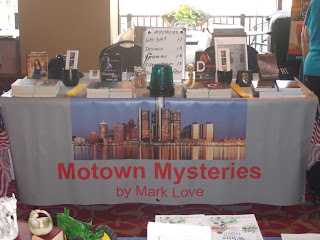 My response: “I always thought so. Got any connections with a producer or a studio?”

His reply, with a knowing wink. “Maybe. You never know.”

So now the book has found an international audience. And like he said, ‘you never know.’ Wouldn’t that be something. I wonder who’d they would cast to play Jefferson Chene?

On a side note, the organizers periodically would award a shopper with a 'golden ticket' that would allow them to pick one free book from the hundreds being offered by the various authors and the organizers would pick up the tab.  Three different times during the weekend, those winners chose one of my books.  That was a nice surprise.  I'm already looking forward to next year's festival.

Since I always have music, here’s a little Motown classic that seemed to follow me along the road Saturday. Hope you enjoy it.

Posted by Motown Mysteries at 2:17 PM