So last weekend I had a very enjoyable time at the Lakeshore Arts Festival in Muskegon, surrounded by a number of other authors and a steady flow of potential readers.  One young lady who stopped by late Friday afternoon was very memorable.  She expressed interest in the Jamie Richmond character.
I gave her a quick summary of Jamie and her activities in all three books.

The young lady winked at me, smiled and said. “Stubborn redheads.”

Recognizing that she was also a redhead, I merely nodded. “Smart too.”

Her smile widened and reached all the way up to an amazing pair of pale blue eyes. “That goes without saying.”

When I described Jamie’s interactions with Malone and police investigations, she picked up a copy of “Fleeing Beauty” and scanned the back cover.  “This reminds me a bit of that TV series, “Castle”, except she’s the writer helping the cops solve the crimes.” 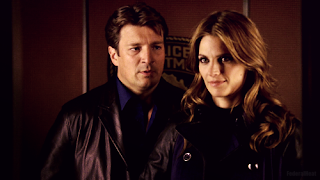 I hadn’t consciously made that connection before, but saw the similarities, particularly since Beckett was a redhead. I explained that I'd started working on the first book in the series long before "Castle" was ever broadcast.  We talked for a few more minutes and she decided to buy a copy of the book.

But her comments stayed with me. I kept thinking about Jamie and her combination of intelligence and stubbornness.  So here’s a bit out of “Fleeing Beauty” that ties into that line of though.

In this scene, Jamie is trying to figure out how someone was able to break into her late father’s studio and steal part of the collection.  She refuses to sit back and let the police work the investigation without her.

When I was working as a reporter, I’d made it a practice to keep the details on any of the people I interacted with on a regular basis. I’d broken it down into folders with different professions. There were attorneys, judges, cops, business people, contractors, editors, and other reporters.  Flipping through the lists, I started making calls. It was interesting how quickly I fell back into reporter mode. I was chasing an idea, just a glimmer of a thought.
Two calls later, I had a new lead. Three more calls and I found someone in the know. Not only that, but they were willing to make an introduction.  Now it was time to hurry up and wait. I spent the time online, doing more research. It took an hour before my phone rang.
“I would like to speak with Miss Jamie Richmond,” a deep, cultured voice said when I snatched up the phone.
“This is Jamie Richmond.”
“A mutual friend suggested it would be our best interest to meet. Are you familiar with the Townsend Hotel?”
I bit back a smartass reply. Everybody in Motown knew that swanky spot in downtown Birmingham. “Yes, I’ve been there before.”
“Tomorrow evening at six-thirty you will find me in the Rugby Grille. I will have an associate present. You may have one hour.”
“How will I know you?”
There was a pause and a dry chuckle. “That will not be necessary, Miss Richmond. I will know you. Will you be alone?”
I couldn’t help but mimic his tone. “I will also have an associate present.”
“Very well, I will see you tomorrow evening.”

So it's just a little sample, but you can see a bit of that stubbornness.  And since I've always music playing, here's what's on as I write this blog. Appropriate?  You tell me.

Posted by Motown Mysteries at 2:08 PM