The Series: To Be Or Not To Be

Last weekend I had the pleasure to participate in a mystery authors panel with Joe Heywood, Bryan Gruley and Vern Smith, who all have ties to western Michigan. After we introduced ourselves to the audience, with a back cover-type blurb about our latest efforts, we started fielding questions.

One that stuck with me had to do with creating a series. Joe, Bryan and I each have written at least one series.  I think it was Joe who commented that three books in a series is about all an audience will follow. That made me wonder. And to paraphrase Shakespeare, “to be or not to be a series: that is the question.”

As a young reader, I was captivated by the adventures of Travis McGee. John D. MacDonald penned over twenty tales with McGee, in addition to numerous stand-alone books. John Sandford has 29 Lucas Davenport novels, along with a dozen Virgil Flowers tales to date.  Michael Connelly has 21 Harry Bosch novels and shows no sign of slowing down. The works of Greg Iles, Robert Crais and C.J. Box jump to mind as well. There are countless others out there.

So, what’s the magic number?  Is it three?

Unfortunately, the discussion with the panel moved on to other topics before we ran out of time. But the idea of limiting a series makes me curious. I don’t have a set number in mind. I’ve written three Jamie Richmond novels and one lengthy short story so far.  With two Jefferson Chene books completed, I’m currently working on number three.  As long as ideas keep coming, I think these characters will be around for a while.

Here's a shot of the panel. That's Joe on the left, with Vern next to me and Bryan on the right. 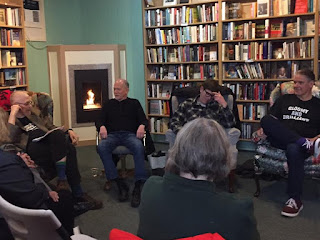 One of the many appealing things to me about a series is the chance to create some memorable characters. And when everything is all said and done, they’re often too good to leave sitting on the desk after one adventure.  A case in point is Pappy Cantrell, the police captain who oversees Chene and the major case squad of detectives.  Here’s a scene from “Why 319?” where Cantrell surprises Chene with his plans on how to conduct the three concurrent homicide investigations. 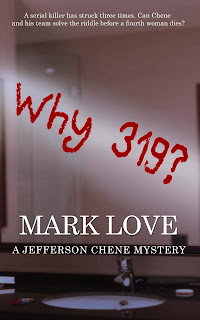 Music this week was a jumble of genres, with a lot of Motown and blues. Then I heard this morning that the US Postal Service has come out with a new stamp, honoring the great Marvin Gaye. So here's one of my favorites. 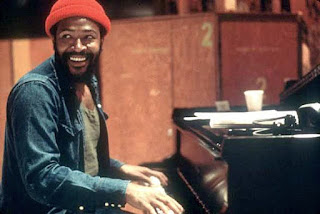 Posted by Motown Mysteries at 10:32 AM