Recently I was talking with some young people about writing mysteries. They had many questions, such as how long it takes me to write a story (it depends) to how do you find a publisher, where do I get my characters from, and much more. But the one that made me laugh was ‘which one is your favorite?’

That’s akin to asking if I have a favorite son. For the record, I have two sons and love them both dearly. They are my pride and joy. As different as night and day, but I wouldn’t want it any other way. 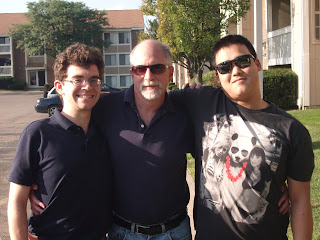 I explained to the group that each novel or short story is important to me. With the Jamie Richmond series, the characters grow stronger with each tale. There’s more development, more conflicts, more growth. The writer cracks the door a little bit wider, letting you learn a few more things about what makes them tick.

The same holds true for Chene. His character is progressing well with the second novel “Your Turn to Die”, where he’s entering into the unfamiliar territory of a romantic relationship.  Many of Chene’s missteps come from my own history. You'll have to try and figure out which ones.

But I can’t name a favorite. I like them all, for various reasons.

Here’s an excerpt from “Why 319?”.  In this scene, Chene returns to the apartment of the latest victim to talk with Simone, her roommate.

Simone Bettencourt must have been watching when I arrived. She was waiting at the door before I finished climbing the stairs. Her hair was brushed and she was wearing jeans and a lightweight yellow cotton sweater. This outfit was much more flattering than the sweats of yesterday, making her slender figure evident. Her feet were bare. It was easy to see the toenails had been recently polished. I caught a faint whiff of perfume as I approached.

I was almost to the door when I noticed her lips trembling. Her eyes were red and puffy. Before I could say a word, tears overwhelmed her again. I stood there for a heartbeat, uncertain what to do. All the years on the job and this was still one of the most difficult parts of it, dealing with the survivors.

Simone might have reached for me. Or I might have reached for her. It was one of those things that I could never definitively answer. All I know is that one moment I was standing in front of her, the next she was in my arms. She buried her face in my chest and started sobbing. Somehow, I guided her back into the apartment and closed the door behind us.

I don’t know how long we stood there. It was a lot more than a moment but less than an hour. Periodically, little tremors ran through her. After a few minutes, I began to feel foolish standing there. Well, foolish isn’t the right word. Uncomfortable was more like it. I tried to ease her back, but she clung to me tighter. The scent of her shampoo filled my head, or maybe it was the slight fragrance of her perfume. I tried to think of other things, non-female kinds of things, with her body pressed close to mine. I tried hockey games, motorcycle races, golf tournaments, and high school debates, politics, old movies, and football. Bad guys I’d put in jail. Dead comics whose humor I’d enjoyed. It didn’t matter. Nothing was working.

At some point in time, Simone seemed to slowly run out of tears. She pulled back a little, wiping her face with her fingertips. Her body was warm. I could feel it through the thin material of the sweater as my hand slid slowly up and down her back. She started to turn away and stumbled. I caught her around the waist and steadied her. I was surprised at how little she weighed.

“I should be all cried out by now.” Her voice caught. “You must think I’m some kind of basket case.”

“Not at all. People deal with grief differently. Some never let it out. Others get angry, resentful. Some seek vengeance.” I realized I was still holding her. It took some difficulty, but I guided her over to the sofa. She collapsed onto the cushions.

This song sprung to mind when writing about favorites. It’s a great one from Stevie Ray Vaughan. Hope you enjoy it.