I’ve had many different jobs over the years in the business world. Nowadays, whether you work or not, you’re liable to come into contact with people from several different generations during the course of the day.

The difference in ages is evident whenever I’m at work. This summer I had a couple of college interns helping me with projects. At the end of a very busy day, someone mentioned movies. A great line from the original “Die Hard” came to mind, where Bruce Willis finally succeeds in getting the attention of a police officer. ‘Welcome to the party, pal’.   But in order for the quote to make sense with our situation, I had to explain the context of the movie and the scene. 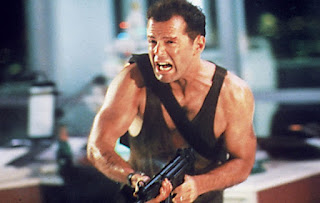 Maybe I need to quiz potential interns on classic movies and music. Or that should become part of their training.

As a writer, an attributes that comes in handy is the power of observation.  Recognizing the differences and capturing the details is part of the life.

One of my goals is for readers to be able to connect with my characters. Nobody’s perfect. Every one of my ‘cast’ has their own flaws and weaknesses, something that makes them stand out in your mind while you’re reading the story. Imagine how boring it would be if everyone was the same.  No thanks!

An example of a different generation appears in “Vanishing Act”.  In this scene, Malone’s unofficial little brother Ian, has arrived to spend a few nights with Jamie and Malone.

Malone had Wednesday and Thursday off that week. So he picked up Ian after school Wednesday and brought him to the house. He had a duffel bag filled with extra clothes, a backpack jammed with books, and some extra athletic shoes. When they arrived, Malone showed Ian the spare bedroom. The kid immediately dumped everything on the floor and headed for the kitchen. I was standing in the doorway of the office, watching this play out.

“Not so fast, hotshot,” Malone said.

“What’s wrong? I’m hungry.” Ian groaned, raising his palms like it was a given.

“And we’ll get some food after you put your gear away. I’ve seen your room at home. That’s not going to happen here.”

Grumbling, Ian returned to the bedroom. Under Malone’s supervision, he unpacked his clothes and neatly put everything away. Then he emptied his backpack and arranged his books on the desk.

I had jumped back behind the desk, pretending to be writing away. Now I snuck out and followed them into the kitchen. Malone led him to the refrigerator.

“Bottom left drawer is filled with fruit. Apples, oranges, and grapes are always there. Bananas are on the counter. You can have fruit as a snack. There are usually two kinds of cheese in the drawer. You can have some with crackers.”

Malone slowly shook his head. “It’s three in the afternoon. Dinner will be at five thirty. A snack will tide you over until dinner.”

Ian grabbed two apples from the drawer. “What if I don’t like what’s for dinner?” He spied me sitting on a kitchen chair. “Is Ms. Richmond a good cook?”

I bit back a laugh as Malone leaned against the stove. “Tonight, I’ll be cooking. We’re having marinated chicken, with potatoes, salad, and green beans. Maybe some fresh biscuits if I’m feeling motivated and appreciated.”

“I appreciate you, Malone,” I said.

Ian took a huge bite out of his apple.

“And on some days, you will help cook,” Malone said.

Malone folded his arms across his chest and narrowed his eyes at the kid. This was more fun than Saturday morning cartoons.

The kid realized he’d put his foot in his mouth along with most of the apple. Suddenly he was shaking his head, trying to find a way out.

“For your information, most of the greatest chefs in the world are men,” Malone said. “Furthermore, while you are here, you are a guest in this house. That means you will be polite, you will keep that bedroom neat and you will do whatever chores Jamie and I feel are appropriate, such as helping clean up the kitchen after dinner. Clear?”

“Good. Now you’ve got time to hit the books. Get some of that homework done before dinner. We’ll have a quick billiard tournament after we eat.”

“Sweet,” Ian said. He finished the second apple, dropped the cores in the garbage can, and headed back toward the bedroom. I waited until he was at the far end of the hall. Malone was still leaning against the stove with his arms crossed. He winked at me.

“You were a little tough on the kid,” I said, rising from my chair and moving to him for a hug. Malone slipped his arms around me and nuzzled the top of my head.

“I’m just setting the ground rules. We all want this to work, so we may as well get started on the right foot.”

“And if you want him to keep coming around, you’d better not let him taste my cooking, Malone.”

I couldn't think of a more appropriate tune to go with this post.  Here's a little classic rock and roll for your enjoyment.

https://youtu.be/qN5zw04WxCc
Posted by Motown Mysteries at 8:44 AM