With any good mystery, ya gotta have a villain. At least one. Sometimes you can have a group, but often there is one who is the epitome of cruel, the ultimate bad guy that every reader wants to see get his due, in some form or another. We all like stories where good conquers evil. That’s natural.

As a writer, it’s always a challenge to create a villain that’s a little different. One who in other circumstances, may be a guy you cheer for. It’s not easy. Often the first draft has a villain who not even his own mother could love.  In some stories, that’s a good place to start. But every once in a while, I strive to make my villain a little bit different, someone with a touch of class, a bit more awareness, a bit more intelligence than normal.

In my research, I'll dig into real life criminals, to get a sense of what drives them. News articles often have details that can provide excellent background.  Not every criminal comes from a broken home or has had to struggle through life to get what they want.  It's my job to find out what motivates all of my characters, including the bad guys.

One of my favorite cinematic villains of all time was Alan Rickman’s character Hans Gruber in “Die Hard”.  This was a very cunning, intelligent man whose meticulous plans were designed to be carried out without wrinkling his expensive European suit. That is, until Bruce Willis shows up to disrupt everything.  So in some respects, I’ve always want to incorporate some of those traits in my villains.

Here’s an example of a villain from “Fleeing Beauty”.  In this scene Jamie and her mother Vera comes face to face with the person behind the theft of her late father’s sculpture.

There was a double tap at the conference room door.  Two burly men in jeans, boots, and work shirts marched into the room. One held a shotgun with a pistol grip, the barrel dangling alongside his leg. The other held a small revolver is his right hand. Behind them marched a slender man with an olive complexion and a neatly trimmed mustache. He was wearing a business suit with a white shirt, the collar undone.
"I am Anton Tancredi.”
The name meant nothing to me. My face must have told him as much.
“But that is not important. I’m afraid you’ve disrupted my plans.” He glanced at the others. “We’ll have to speed up the timetable.”
A thousand questions raced through my mind, but I was too numb to sort them. I took a tentative step toward Vera. No one tried to stop me. I bent down next to her.
“Are you okay?”
She nodded. “I’m scared, Jamie. What is all this about?”
“I don’t know.”
“Oh, but I think you do know,” Tancredi said. He tapped revolver guy on the shoulder. “Put that away. Go to the shop and get the truck.”
“Tanc, you can’t be serious! You said we were gonna wait until after midnight.”
“Paulie, there are always contingency plans. Besides, it will be less suspicious if we’re out in broad daylight. So many people will be celebrating the weekend, a stray truck here or there will hardly be noticed. George and I will be just fine. Have Skeech come with you. We’ll meet you at the loading doors in an hour.”
Paulie hesitated for a moment. He shrugged and went out the conference room door.
Tancredi smiled at me. “I’ve heard about you. The quick tempered redhead.  You’ve certainly been a complication to my plans. But I enjoy a challenge.”

Here's a link to a one of my favorite scenes from "Die Hard".  Enjoy!
https://www.youtube.com/watch?v=mklnXM3LIXo 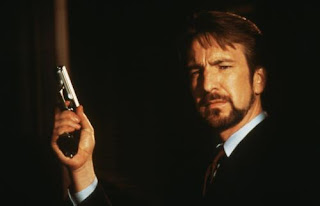 Posted by Motown Mysteries at 8:09 AM