It’s the new year and in many parts of the country, Old Man Winter is making his presence felt.  There was even a blurb on the national news the other night that Atlanta Georgia was bracing for three inches of snow, which might even lead to the schools being closed.  Up here, we call that a dusting.

But all this winter weather got me thinking about my favorite redheaded character, Jamie Richmond.   Here’s a scene from “Devious” where a snowy night captures her attention.

I piled the pillows on the floor by the bay window and watched the snowfall. Something about the way snow shines as it falls pleases and depresses me at the same time.  Fresh snow always seems so clean and fragile, as if it's giving the city a gentle bath. Here's a chance to hide all the filth and debris we leave behind, buried under a lily-white blanket. For some reason, tonight I felt like getting pleasantly buzzed. I warmed some apple cider in the microwave and added a healthy shot of Southern Comfort. Sitting like a sultan on the pillows, sipping my potent brew, I watched the snow. The heat from the booze warmed me and my thoughts turned to Malone.

I'm my own worst enemy when it comes to men. I meet a guy and my weird sense of humor tends to scare him off. Or it’s my career. Or it’s my body. I have always been slender and I don’t have fabulous curves. I’ve got a small chest, narrow waist, small hips. There is nothing about my physique that would set the world on fire.  Romance is something that happens to other people. I write about it only if I can work it into a story.  But Malone…

Geez, what a difference he was. He seemed to like my body just fine. And he had me so wrapped up, I couldn't think straight. The other day I was doodling while on the phone with Shannon. When I hung up I almost screamed. I'd written "Mrs. Jamie Malone" half a dozen times in a notebook and circled it with little Cupid hearts.  High school shit.  Hell, it was more like grammar school shit. But it scared me nonetheless. How had I let myself fall so quickly, so completely, for this guy I had just met? A guy I really knew very little about.  Maybe it was part of my genetics, passed down from my crazy mother.

When I finished my cider, I slipped off the pillows and went for a refill. Was I blowing this relationship too? Like every other one worth mentioning in the last ten years? Was this courtship doomed from the start?  I resumed my perch and watched the snowflakes perform their gravitational dance.

Shortly after midnight the snow stopped. Everything outside my window appeared pure and freshly made. There were no wrappers stuck in the bushes, no cigarette butts or used condoms visible. Everything was brand new. A row of pine trees in the park across the street made me think of the holidays. Light from the street lamps and the stars above reflected in the white powder. There were no tire tracks or footprints to mar it. I was looking at a new creation, a world untouched by human hands. It was beautiful.

Malone would be here soon. Could I keep the relationship feeling brand new? Could I roll it in snow and keep it from falling apart? I didn't want to lose this guy, but I didn't know how not to drive him away. I felt like shit. My cider was gone. I fixed another one, put some Earl Klugh on the stereo and resumed my perch. The pillows were softer now, tempting me to stretch out. I did. Even the branches of the giant elms lining the street were thick with snow. Twinkles of reflected starlight reminded me of Malone's eyes. 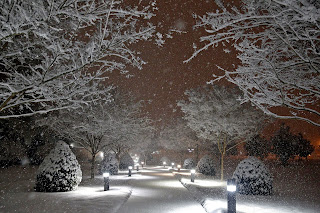 Posted by Motown Mysteries at 12:41 PM