Years ago I was reading a book that had been recommended by a friend. It was supposed to be part mystery, part thriller.  I got about halfway through it before disgust took over.  While the story itself was interesting, the main character completely turned me off.

It was too unbelievable. Every time this guy got into a situation, it was magically revealed that he knew how to do everything.

Expert marksman with a variety of weapons? No problem.

Able to speak half a dozen languages? No problem.

Fly a plane? No problem.

The real problem for me was that this author had done nothing to set the stage that this character had all this prior knowledge and training. There was no foreshadowing, no details of his background shared during lengthy conversations with others or self reflection. There was nothing he couldn’t do.

And he never made a mistake.

That’s when I chucked the book into the pile that gets donated to the library. No mistakes!   How can that be believable?

When creating characters, one of my goals is to make someone that readers can relate to. Whether it’s difficulty with relationships, a drinking problem, a couple of divorces, conflicts with authority or sibling rivalry, there needs to be an aspect of your character that your readers can identify with.

Because deep down, we all make mistakes. We’re only human. 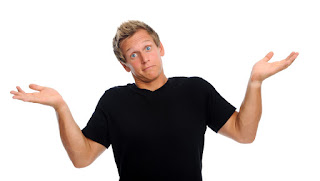 Last week a colleague at the college mentioned that when another professor stopped by her office, she thought it was me and made a couple of jokes utilizing my last name. It was only after the confused prof didn’t respond that she realized her error.  She explained and they shared a laugh. When I saw her a day later, she was still laughing about it.  Neither I nor the other professor were offended.

As writers, so should your characters. Because that makes them real.

Here’s an excerpt from “Devious” the first Jamie Richmond mystery.  The story line is that while doing research for a character in her next novel, Jamie rides along with Herman Kleinschmidt, a state police trooper. During the course of the evening’s patrol, Jamie witnesses him get shot. When the police investigation stalls, she becomes obsessed about the case and wants answers.

In this scene, Jamie has been working on her computer for several hours when she decides to take a break and get out of the apartment for some fresh air and a quick bite.  Only when she returns does she realize her mistake. 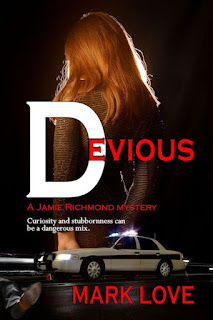 There's a little bakery down the block from my place, where they take huge chocolate chip cookies out of the oven and surround them with a heaping scoop of French vanilla ice cream. Then add gobs of hot fudge and more chocolate chips. So sinful. They even let you sit in the back, away from the store window, and devour it. I hadn't indulged in one in months.

I washed it all down with a cup of coffee and waited for my system to explode from the sugar shock. Surrounded by the aromas of bread baking and cinnamon rolls, I probably gained five pounds by osmosis. I wondered how long I could continue to eat like this before my figure went to hell. I’m not scrawny like a fashion model, but I am slender. I like the shape I’m in. And apparently, so does Malone. One of these days, I’ll get back to my yoga classes.

After the feast I went for a long walk, bundled inside my down coat. Yesterday's heat wave had been Mother Nature’s cruel trick. Today was typical November weather, cold and blustery with a snappy wind. Even in the frigid air, it felt good to stretch my legs and let my mind wander. I walked about two miles, circling back toward my apartment. As I approached my building, two people came out of the entrance and trotted over to the parking lot. I froze.

One of those two was Herman Kleinschmidt. Even if I hadn't been close enough to see his face, there was no mistaking his bulk. The right sleeve of his jacket flapped loosely at his side. His arm was still in the sling. The other person was nondescript, smaller than Smitty, wearing a nylon parka with a hood.

Don't ask me why I didn't hurry after them instead of stepping back behind an oak tree. Maybe it was something about the way they moved, or the way Smitty kept looking back over his shoulder. Either way, it made me uncomfortable. I waited until I saw them drive away together before I went inside.

My apartment building isn't fancy. It's part of a complex where six rental units make up each three-story structure. I've got the east side of the top floor, with a nice view of the park. I'm the only person who works at home. Chances were nil that Smitty was visiting one of my neighbors.

I'd been gone over an hour. Since I hadn't taken my car, I hadn't taken my keys, which meant I hadn't locked my door either. My heart was thumping erratically as I reached for the doorknob. The door swung open at my touch and I remained in the hall, afraid to go inside. Where the hell was Ace Richmond, Private Eye when I needed her?

When no one jumped out from behind the towering pile of magazines in the corner, I took a cautious step inside. Everything looked the same as when I left. The handmade quilt from my cousin Linda remained draped sloppily off the bentwood rocker. Someone could have been hiding inside the sofa, but it would take them ten minutes to struggle free of the cushions. Okay, so I’m not Holly Homemaker.

I went down the hall to my bedroom. The blankets and sheets were in the same twisted clump I'd left them in after attacking Malone's naked body over the dirty breakfast dishes. My clothes from the New York trip still protruded from the closet door.

"Anybody here?" I whispered foolishly.  I don’t know what I would have done if someone had answered.

That left the bath and the spare bedroom. It's not really a bedroom, since there's no bed in there. I use it as my office. A desk, two file cabinets, a bookcase and some plants make up the majority of the furnishings. My computer dominates the room, with cables running everywhere. Printer, monitor and keyboard are perched precariously on various parts of the desk.

If I hadn't already been nervous, I certainly was now. My computer was on. Not just the hard drive or the monitor, but the entire system, even the printer. I never leave the system on. Call it being economical or superstitious or environmentally concerned, I don’t care. I never leave the system on, because I never know how long I'll be gone. And I hadn't been using the printer. There’s an independent switch for it, used only when needed.

"You bastard!" I slammed my hand on the desk. Too late now, I ran to the front door and latched the bolt. Then I grabbed the phone and started to call Malone. I got through six numbers before hesitation settled in. Nothing was moved. Nothing was stolen. What exactly did I expect Malone to do? Swoop over to protect me?

I went back to the computer and began checking the data. Every file I could remember was still there. I'd been working on the revisions earlier and all of my changes were intact. Nothing had been disturbed. What could he have been doing? I keyed in the directory and scrolled through a list of all my files. At first I didn’t notice anything wrong.

I sat back and closed my eyes, concentrating. Like most writers, I use code names for the files in my computer. Since there's no master list that will reveal to anyone what each file actually contains, the only way to discover the contents to any particular file is to call it up on the screen. For the project I was considering about the state trooper, I had named the file Licorice. There's no connection between that and the story, it's just what popped into my head. Beside the file name is the size of the file in bytes, and the last dated entry. My system automatically creates a backup whenever a file is changed, sort of a fail-safe system. I hadn’t been in the Licorice file recently. My first and only entry had been on Monday, before my trip to New York City.

But the directory showed activity today. The main file showed a slightly different number than the backup file. I swallowed hard and punched in Licorice.

Four pages of notes lit up the screen. There was my own unique style of speed typing for rough drafts. No care with regards to spelling or punctuation, just rambled lines of words with an occasional break for a new paragraph or thought. My notes ended in the middle of the fourth page.  There was a gap of five or six lines then this message appeared.

LEAVE IT ALONE BITCH!  IT'S NOT WORTH DYING OVER.

The musical interlude this week comes from Billy Joel.  Enjoy!

Posted by Motown Mysteries at 7:36 AM