You never know how those brief encounters we have with someone can impact them. Maybe it’s just a smile at someone in the grocery store as you let a person proceed in front of you. Maybe it’s a glance as you keep bumping into each other as you move through the aisles.  Sometimes one interaction can return to you months or years later.

Yesterday was a perfect example. While out running errands, I stopped at the bank to take care of some deposits. Cassandra, the young lady behind the counter, smiled brightly as she greeted me. She looked vaguely familiar. It’s rare that I actually go into the bank, instead of using the ATM or online banking. But standing there, she commented that we’d met before.

In addition to my full time job, I also teach business classes at the local college. Turns out that Cassandra was one of my former students from a class several years ago. We chatted for a few minutes.  She updated me on her studies and her thoughts about continuing her education. Cassandra stated how much she enjoyed my class and that she’d learned a lot.  It was nice to hear I’d had a positive impact on her life.

With my writing, I don’t plot everything out in advance with an outline. I just start with an idea and a character or two and never know where that might lead. Sometimes an interaction between a couple of characters can have minor action in the story. Other times, they can play a significant role in the outcome. Hey, it’s not up to me. The characters are the ones that make it happen.

Here’s an excerpt from “Vanishing Act” that illustrates the greater impact.  In this scene, Jamie and Linda are struggling to escape the kidnapper when help arrives from an unexpected corner.

Our clothes were getting waterlogged. I didn’t know how much longer adrenaline would keep us going. I pressed my back to wall, knowing full well that when she stepped up, I might be submerged in the freezing water. That didn’t matter. I had to get her out.

I laced my fingers together. She leaned close and kissed my cheek. Then she whispered in my ear, “I will always love you, Jamie.”

“I will always love you. Now get your cute little ass out of this water so we can go home.”

She put her right foot into my hands. Together we counted to three. Linda reached up with her good arm for the top of the seawall as I lifted my arms with everything I had. As I expected, the force of her weight and the sodden clothes drove me under. Suddenly, it was as if she was light as a feather. Her weight was gone. Yet I was sinking deeper into the cold, dark water.

Strong hands grabbed the shoulders of my ski jacket and plucked me out of the water like a puppy from a washtub.

“You picked a hell of a time to go swimming, Jamie. This ain’t exactly beach bikini weather.”

I shook the water out of my eyes and looked at him. He was sprawled on the ground, his arms hanging out over the edge of the seawall, holding my upper body out of the water. It took a second before I recognized him.

“You gonna pull me in, Chene, or leave me dangling like a marlin?”

“I’ve got to get a better grip, Jamie. It’s nothing personal.” He slid one hand down to my armpit then the other one.

“You get me out of here, Chene and I’m going to kiss you.”

A flicker of a smile crossed his face. “Don’t think Malone would be too keen on that. Brace your feet on the wall. Then when I straighten up, just walk up.”

He must have thought I was one of the Flying Wallendas or part of a circus act. I did as he said and the next thing I knew I was on the ground. I lay there, relishing the feel of the frozen ground against my cheek. Turning my head, I saw a black Pontiac sedan in the driveway. It was running and all the lights were on. A door slammed and someone appeared above me.

“You keep this up, Jamie and you’ll start giving civilians the idea they don’t really need cops to protect them.”

I rolled over and sat up. Megan McDonald, the other detective I met recently with Chene, squatted beside me and wrapped a heavy wool blanket around my shoulders. 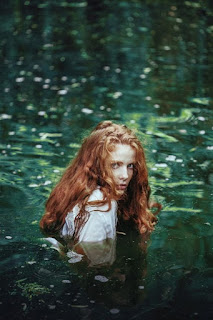 While writing this, the great Canadian guitarist Jesse Cook was on the stereo. Here's one of my favorites, called "Mario Takes a Walk."  Enjoy!